My father always told me: “If it’s too good to be true, then it’s probably not.” Undoubtedly everyone at some point in their life has been told this by a parent or grandparent. But it certainly applies to the article that came to us from http://cnn.com.de: 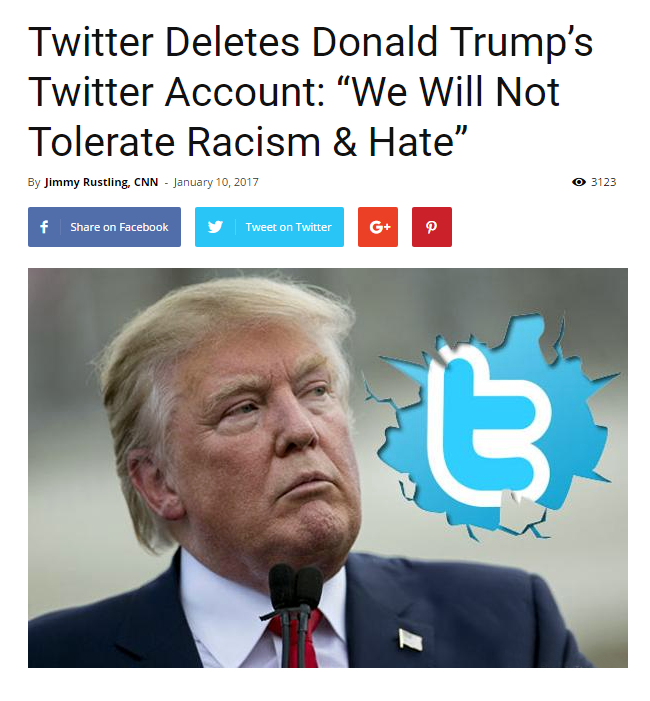 CNN.com.de follows the same URL convention from other fake-news sites, like CBSnews.com.co, ABCnews.com.co, and a seemingly countless, evergrowing list of others. The ‘story’ of this particular CNN.com.de, according to their contact page, is that it is “a news entertainment music fashion website” called Carla’s Nice Nunnery, or CNN.

In the Twitter-Deletes-Trump article, we also see this:

Twitter has setup [sic] a hotline for those wishing to voice any concerns or comments over the company’s impending ban of Donald Trump. That hotline’s phone number is (785) 273-0325.

That -0325 number actually belongs to the vile hatemongers over at the Westboro Baptist Church, something that Horner has done with other fake news stories and sites.

CNN.com.de’s contact details lists that same -0325 phone number and their address as 3701 SW 12th St, Topeka, KS 66604 — which is also the address for the Westboro Baptist Church.

We’re also graced with the appearance of our old friend with the now-infamous name of Paul Horner in the site’s contact page.

You might recall that Horner has had quite the illustrious and varied career. He’s been a ‘spokesperson for Yelp,’ the recipient of the first head transplant surgery, a 15-year old boy, and in this Twitter-Deletes-Trump story, a ‘representative of Twitter.’

If ever you see the name Paul Horner in an article, either in the context of the story or as a writer, you can rest assured that it’s fake-news/satire.

Editorial Addition: The author of the Twitter-Deletes-Trump article is listed as Jimmy Rustling. That name is also associated with fake-news/satire/Horner sites, including CBSNews.com.co previously mentioned.