We’re going to try show the satirical nature of Hard Dawn using the most family-friendly articles they have.

But when the article submitted is “Power Bottoming,” The Most Disturbing New Trend in American Homosexuality, we know our work is going to be cut out for us. It’ll be hard (heh!) but here goes . . .

Hard Dawn is another example of Poe’s Law:

Not to be confused with the law of poetry enshrined by Edgar Allan Poe, the internet Poe’s Law states: “Without a winking smiley or other blatant display of humour, it is impossible to create a parody of fundamentalism that someone won’t mistake for the real thing.”

– from Internet rules and laws: the top 10, from Godwin to Poe

Under Trump, Life in the Hipster Ghettos Will Face Renewed Scrutiny

Why Are Potheads So Annoying?

Throughout the site, you can see a definite motif: ultra-conservatism/ultra-patriotism expressed through hyper-homoerotic imagery.

And they do it well!

And Hard Dawn does not break character, only tipping their hand in instances where their humor truly shines, as with the articles previously mentioned. 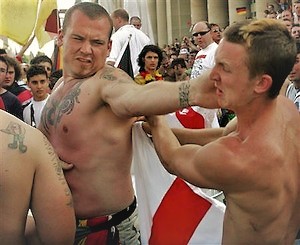