Business Insider has an interesting piece on how liberal or conservative other news agencies are — or, specifically, the audiences of the agency. They are often accused of leaning left; however, looking at their front page on 12-6-2016, it seems fairly balanced to us.

‘The US is totally out of these [Turkey-Syria Peace] talks, and they’re pretty angry about it’

‘After meeting with Trump, CEO of Japanese telecom company says it will bring 50,000 jobs to US’

‘SCHWARZMAN: Donald Trump is going to change the “architecture of the world” ‘

That’s one pro-Trump headline, above-the-fold; three Trump-related headlines below-the-fold, only one of which could really be seen as anti-Trump if you squint really hard.

We have, however, recommended using ALL-CAPS HEADLINES as a way of filtering out potentially shoddy news sources. Business Insider not only does it (as in the headlines above) but also defended this clickbait-y practice, here and here

“From the beginning, in 2009, the site specialized in clickbait headlines, but it quickly acquired an audience by aggregating business news and selecting the most important stories.”

Back in 2013, The New Yorker accused the Business Insider as prioritizing speed over accuracy, which can likely be a critique thrown at all of the competing news sources in the Internet Age.

As with any source, even ones we consider real, you should always double-check sources. 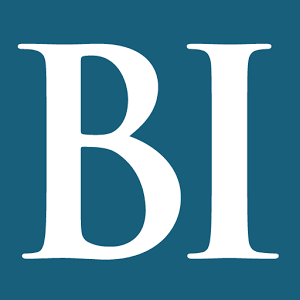