When you first visit But That’s None Of My Business, or BTNOMB as I like to call them, you’re greeted with an About Us of sorts:

Welcome to But That’s None Of My Business, the best site on the web for celebrity news, celebrity gossip, hip hop news, and real stories so outrageous they often defy logic, common sense, and reason.

It’s clear that the site’s primary goal is entertainment. It’s filled with the sorts of “juicy” celeb stories that may or may not be true. (And by the time the gossip is proven or disproven, everyone has moved on to the next big story anyway. Or . . . is that just me?)

They do have a satire section, however, but you would have to look at the page breadcrumbs to see the designation. 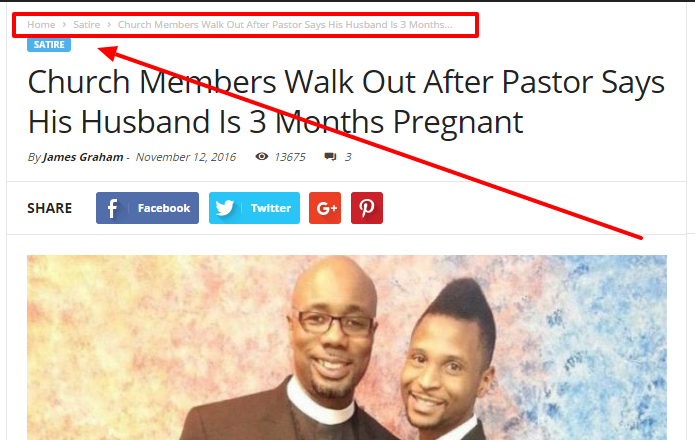 But who the fuck does that?

BTNOMB disables right-click functionality on the site. So grabbing an image or a chunk of text to perform a Google search on it won’t work. This makes verifying the story (slightly) problematic.

But we looked at three stories:

This article was written shortly after Trump won his bid for Presidency and was clearly designed for TTO (traffic through outrage). Additionally, BTNOMB simply reshared the ‘satirical’ Empire Herald story with the same title.

The cowardice of this “man”, unfortunately, appears to be true. BTNOMB’s story copies an LA Times story exactly.

This, too, was true. CW6, Fox5 San Diego, and others, reported the identification and, 4 days prior to this story breaking, CBS8 San Diego reported the initial incident, citing that the local authorities were looking for information about the suspect.

With these four stories reviewed, one thing is clear: the site selects the most outlandish and outrageous (emphasis on “rage”) stories to share. Your clicks/engagement is what’s important, not the truthiness of a story. This is how questionable stories get slipped through as “legit” news. If you come across a shared story from But That’s None Of My Business, make sure it’s not from their satire section or reshared from a proven satire site.

This is not to say that BTNOMB is not fun — because it is. If you’re a fan of the outlandish, you’ll have a nice time roaming BTNOMB’s content.

Editor’s Note: We toyed with the idea of directly showing you how to get around a site’s right-click disabling. The ability to right-click is instrumental when you’re trying to determine a story’s validity, but plenty of sites have very valid reasons to disable right-clicks. So we’ve opted not to provide that information to you. But . . . we live in the 21st century. You can easily find this information. 😉