The article sent to us for Hang the Bankers was this one: “US launches cyber attack on Russia’s power grid, telco networks and Kremlin command systems.”

In the article, they claim that Russian Foreign Ministry spokesperson Maria Zakharova said:

“If no official reaction from the American administration follows, it would mean state cyberterrorism exists in the US. If the threats of the attack, which were published by the US media, are carried out, Moscow would be justified in charging Washington.”

They even link to The Ministry of Foreign Affairs of the Russian Federation article where, according to Google Translate, there was this exchange between a reporter and Zakharova:

Response by Russian MFA Spokesman M.V.Zaharovoy to a Media Question Regarding Reports on the implementation of the US military hackers in the telecommunication and electrical Russia

Question: How would you comment on reports about the implementation of the US military hackers in Russia telecommunication and power?

Answer: In this regard, there was a message in the media about the introduction of US military hackers in the telecommunication and electrical Russia, as well as “the Kremlin’s command system” anticipate the reaction of authorities of the USA , including the White House and the State Department, the legal assessment of this information.

The absence of an official response from the US administration would mean the existence of the US state of cyber-terrorism, and in the case of enforcement threats, aired by the US media, Moscow will have the full right to bring Washington to the corresponding charges.

This is quite a different picture than the one Hang the Bankers is trying to paint.

“cybersecurity measures taken at the level proper for the current situation, and the threats voiced against us by officials of other nations.”

A quick search on that quote returns other conspiracy theory and/or ultra-conservative sites that have also alleged the quote, without any additional attributing source link. 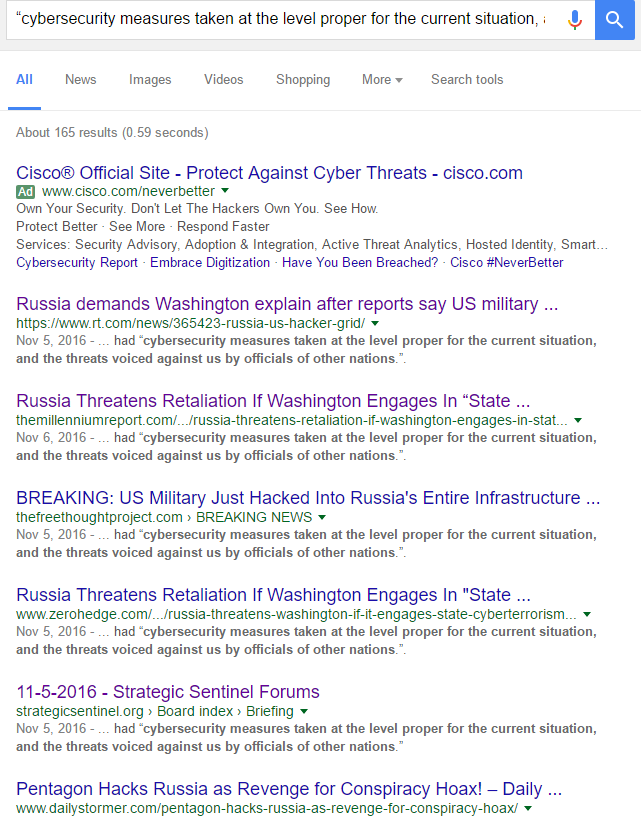 Moreover, that same article mentions allegations being thrown around by then Presidential hopeful Clinton, yet nowhere does it mention President-Elect Trump’s very public (and very recorded) enourangement of Russian involvement:

“Russia, if you’re listening, I hope you’re able to find the 30,000 emails that are missing,” Mr. Trump said during a news conference here in an apparent reference to Mrs. Clinton’s deleted emails. “I think you will probably be rewarded mightily by our press.” &ndas President Elect Donald Trump,

The intent with this — and countless other articles on the site — is clear: combine ClickBait-y headlines and distort the truth just enough serve the purpose of their agenda. Hell, even their site’s name is enough to warrant a ClickBait judgment.